The Mānuka honey business is worth an estimated $1 billion to New Zealand, with much of that value held within the Māori economy.

But as with any high-value product, Mānuka honey is at high risk of counterfeiting.  A new traceability software system called ApiTrak has been designed to protect the integrity of the real deal.

According to the Ministry of Primary Industries, over 80% of the honey sold globally as Mānuka may in fact be fraudulently labelled.

It was this issue that ApiTrak founder Hayden Stowell picked up on back in 2010.  When Hayden travelled to Asia in 2014 as part of the Poutama-led Miere coalition, Hayden discovered it was feasible to try and achieve an industry-wide solution to the problem of counterfeiting and related issues like food safety.  At the time Hayden was part owner of Taku Honey with his father Les.

After Hayden decided to turn ApiTrak from an idea to a potential industry game-changer, he teamed up with Duncan Wiliamson in 2015 who provided the IT expertise.

ApiTrak provides a solution that connects the supply chain, meaning total transparency for everyone from producers, to distributors to retailers to consumers.  It integrates with current systems, for example the Asure Quality Systems and key honey testing laboratories.

ApiTrak recently launched the first of its modules for use by landowners and beekeepers in New Zealand.  They are seeing a rapid uptake and have also received enquiries from Australia, Europe, Taiwan, US and Canada.

Apitrak leads the world in terms of track and trace in the primary industries.

Hayden explains: “There actually isn’t any other system anywhere that provides such certainty about the integrity of a product.  No one else has the same traceability requirements that we do with Mānuka.  For a system to work effectively it also requires a strong industry-wide network of producers who are equally motivated to protect their product and the local industry.”

Before Hayden and Duncan launched ApiTrak the traceability system was essentially paper-based, so ApiTrak has been designed to fill the information gap that exists between hive and processing plant.

There’s also the potential to develop the product for use in international markets and other industries, for example, dairy, beef, lamb, and berryfruit.  Hayden and Duncan’s company Origins Software is an umbrella brand for potential developments.

Hayden had a diverse background before he embarked on his own journey in honey in 2004.  The various careers he embarked on fueled his creative mind and the many disruptive business opportunities that existed.  “My dad was moving to the East Coast, and as he had a background in fruit and vegetable export, he was asked by Wira Gardiner who had set up beekeeping operations to look after the marketing arm.  I got involved helping with some of the labelling and branding – that became the third largest brand in Shanghai, called Ora.  In the subsequent years Dad and I collaborated on several other honey brands.”

Duncan’s vast experience in the IT industry (over 45 years!) and passion for exploring emerging technologies has allowed Origins to stay ahead of the pack and be able to quickly adapt in a world where technology is evolving at an exponential rate.

Hayden says the prominence of Māori businesses in the Mānuka honey industry reflects the fact Māori landowners are optimising the value of land with Mānuka on it.  “In the past we might have let other people keep some hives on our land for a peppercorn rent or a few jars of honey, but there is a much deeper capability and desire now to generate real value.  The fact we can work as a coalition is absolutely vital to the success of this industry, because it’s all about protecting the integrity of the supply, and you can only do that if all stakeholders in the sector are on board.”

ApiTrak is a modular, cloud-based platform that provides full visibility of the integrity of the honey supply chain from land to end consumer. 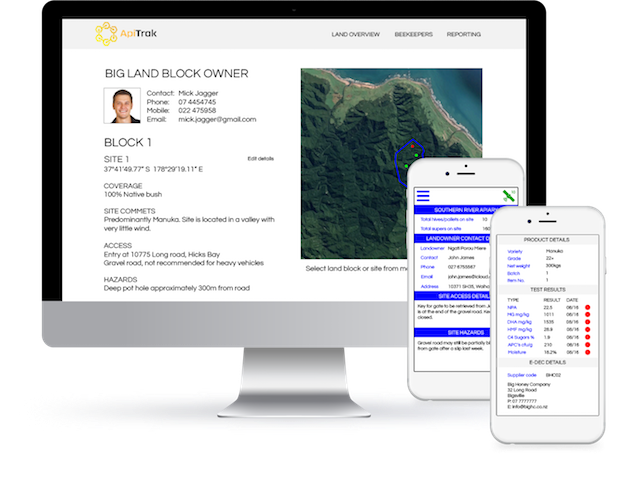 It is an affordable easy-to-use digital platform that not only enhances product data management throughout, but also integrates with many existing systems.

The five integrated modules allow users to track honey through the supply chain, utilising small NFC RFID tags which are attached to hives, drums and jars.  ApiTrak use a combination of mobile apps and PC-based platforms to simplify data management, without the need for expensive equipment.

ApiTrak’s goal is to “ring-fence” the industry so that stolen or adulterated honey can not enter the supply chain without being noticed.  Although ApiTrak looks simple on the outside, there is a whole lot under the hood that constantly works to identify those trying to exploit the Mānuka honey industry’s vulnerabilities.

The more that use or integrate with ApiTrak, the stronger it becomes!