Augmented Reality is about to add a digital intelligence layer to our every surrounding, transforming retail, manufacturing, education, tourism, real estate, and almost every major industry that holds up our economy today.

Just last year, the global VR/AR market hit a value of $814.7 billion, and it is only expected to continue surging at a 63 percent CAGR until 2025.

Apple’s Tim Cook has remarked, “I regard [AR] as a big idea like the smartphone […] The smartphone is for everyone.  We don’t have to think the iPhone is about a certain demographic, or country, or vertical market.  It’s for everyone.  I think AR is that big, it’s huge.”

And as Apple, Microsoft, Alphabet, and numerous other players begin entering the AR market, we are on the cusp of witnessing a newly augmented world.

In one of the greatest technological revolutions of this century, smartphones dematerialised cameras, stereos, video game consoles, TVs, GPS systems, calculators, paper, and even matchmaking as we knew it.

AR glasses will soon perpetuate this, ultimately dematerialising the smartphone itself.  We will no longer gaze into tiny, two-dimensional screens but rather see through a fully immersive, 3D interface.

While already beginning to permeate mobile applications, AR will soon migrate to headsets, and eventually reach us through contact lenses — replacing over 3 billion smartphones in use today. 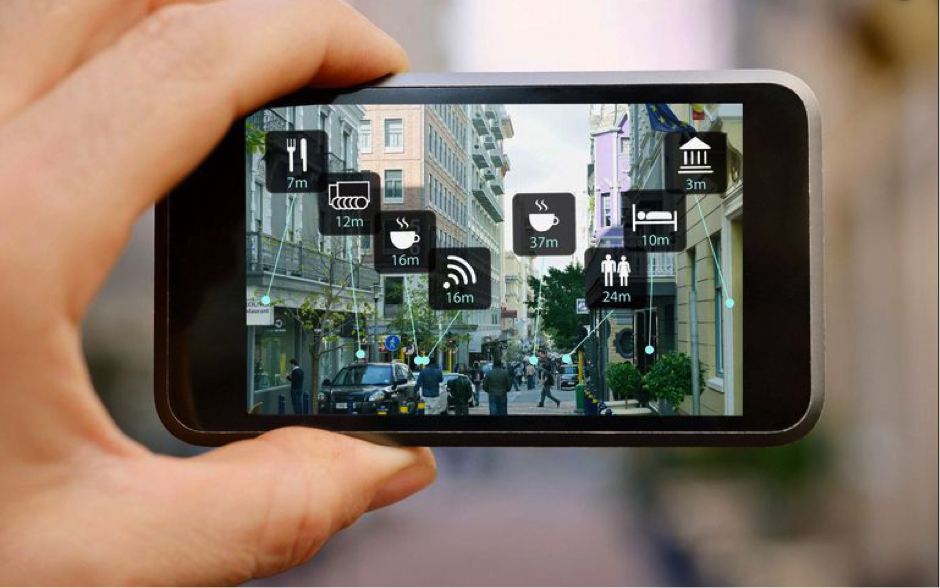 AR superimposes digital worlds onto physical environments (by contrast to VR, which completely immerses users in digital realities).  In this way, AR allows users to remain engaged with their physical surroundings, serving as a visual enhancement rather than replacement.

And while AR headsets remain too pricey for widespread consumer adoption, distribution is fast increasing.  Roughly 150,000 headsets were shipped in 2016, and this number is expected to reach 22.8 million by 2022.

Meanwhile, AR app development has skyrocketed, allowing smartphone users to sample rudimentary levels of the technology through numerous mobile applications.  Already, over 1 billion people across the globe use mobile AR, and a majority of mobile AR integrations involve social media (84%) and e-commerce (41%).

Magic Leap, a company aiming to eliminate the screen altogether, has raised a total of $2.6 billion since its founding in 2010.  With its own head-mounted virtual retinal display, Magic Leap projects a digital light field into users’ eyes to superimpose 3D computer-generated imagery over set environments, whether social avatars, news broadcasts or interactive games.

Mojo Vision, in its own right, has raised $108 million in its efforts to develop and produce an AR contact lens.  Or take Samsung’s recently granted U.S. patent to develop smart lenses capable of streaming text, capturing videos, and even beaming images directly into a wearer’s eyes.  Given their multi-layered lens architecture, the contacts are even designed to include a motion sensor (for eye movement tracking), hidden camera, and display unit.

And as of this writing, nearly 1,800 different AR startups populate the crowdfunding site AngelList.

While AR isn’t (yet) as democratised as VR, $100 will get you an entry-level Leap Motion headset, while a top-of-the-line Microsoft HoloLens 2 remains priced at $3,500.  However, heads-up-displays in luxury automobiles — arguably the first AR applications to go mainstream — will soon become a standard commodity in economy models.

And as corporate partnerships with AR startups grow increasingly common, the convergence of augmented reality with sensors, networks, and IoT will transform almost every industry imaginable.

A Taste of Industry Transformations 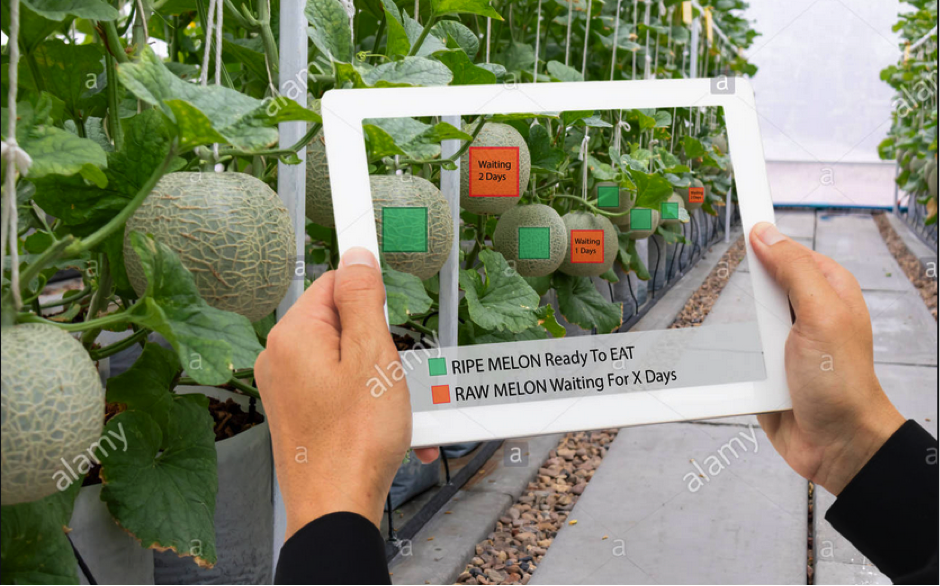 In Manufacturing & Industry, AR training simulations are already beginning to teach us how to operate numerous machines and equipment, even to fly planes.  Microsoft, for instance, is targeting enterprise clients with its HoloLens 2, as the AR device’s Remote Assist function allows workers to call in virtual guidance if unfamiliar problems arise in the manufacturing process.

Healthcare: AR will allow surgeons to “see inside” clogged arteries, provide precise incision guides, or flag potential risks, introducing seamless efficiency in everything from reconstructive surgeries to meticulous tumor removals.  Medical students will use AR to peel back layers on virtual cadavers.  And in everyday health, we will soon track nearly every health and performance metric — whether heart rate, blood pressure, or nutritional data — through AR lenses (as opposed to wearables).

Education: In our classrooms, AR will allow children (and adults alike!) to explore both virtual objects and virtual worlds.  But beyond the classroom, we will have the option to employ AR as a private teacher wherever we go.  Buildings will project their history into our field of view.  Museums might have AR-enhanced displays.  Every pond and park will double as a virtual-overlaid lesson in biology and ecology.  Or teach your children the value of money with virtual budgeting and mathematical tabulations at grocery and department stores.  Already, apps like Sky Map and Google Translate allow users to learn about their surroundings through smartphone camera lenses, and AR’s teaching capabilities are only on the rise.

Yet Retail & Advertising take AR’s transformative potential to a new level.  Hungry and on a budget?  Your smart AR contact lenses might show you all available lunch specials on the block, cross-referenced with real-time customer ratings, special deals, and your own health data for individualised recommendations.  Storefront windows will morph to display your personalised clothing preferences, continuously tracked by AI, as eye-tracking technology allows your AR lenses to project every garment that grabs your attention onto your form, in your size.  Smart AR advertising — if enabled — will target your every unique preference, transparently informing you of comparable, cheaper options the minute you reach for an item.

And in Entertainment, we will soon be able to toggle into imaginary realities, or even customise physical spaces with our own designs.  3D creations will become intuitive and shareable.  Sports player stats will be superimposed onto live sporting events, as spectators recreate immersive stadiums with front-row seats in their own backyards.  Turn on game mode, and every streetside, park, store, and neighbourhood merges into a virtually overlaid game, socially interactive and interspersed with everyday life.

In Transportation, AR displays integrated in vehicle windows will allow users to access real-time information about the restaurants, stores, and landmarks they pass.  Walking, biking, and driving directions will be embedded in our routes through AR.  And when sitting in your autonomous vehicle-turned office on the way to work, AR will have the power to convert any vessel into a virtual haven of your choice.

Reaching for your AR-enabled glasses upon waking up, your Jarvis-like AI populates your visual field with any new updates and personalised notifications.

You begin the day with a new pancake recipe, directed seamlessly by a cooking app in your AR glasses, with ingredients tailored to new programmed dietary preferences.  Glancing at your plate, your glasses inform you of the meal’s nutritional value, tracking these metrics in your health monitor.

As you need to fly cross-country today, your AI hails an autonomous shuttle to the airport.  Along the way, you switch your glasses to creation mode, allowing you to populate entire swaths of the city with various art pieces your friends have created in the virtual world.  Dropping a few of your own 3D designs across the city, your AR glasses even allow you to turn the vehicle floor into a virtual pond as you glide along a smart highway (equipped for electric vehicle charging).

Upon arriving at the airport, your AR glasses switch gears to navigation mode, displaying arrows that direct you seamlessly to your boarding gate.

Walking into your hotel, you activate tourist mode, offering a number of facts and relevant figures about nearby historical buildings and monuments.  Toggle to restaurant mode for a look at nearby eatery reviews, tailored to the colleagues you’ll be dining with.

Winding down, you briefly scroll through some pictures captured with your glasses throughout the day, sharing them with family through an interface completely controlled via eye movements.

Welcome to the augmented world of 2030.

While enterprises are fuelling initial deployment of AR headsets for employee training and professional retooling, widespread consumer adoption is fast reaching the horizon.  And as hardware and connectivity skyrocket, driving down prices and democratising access, sleek AR glasses — if not dematerialised lenses — will become an everyday given.

Yet ultimately, AR will give rise to neural architectures directly embedded through brain-computer interfaces.  Our mode of interaction with the IoT will evolve from smartphone screens, to AR glasses, to contact lenses, to BCIs.