ReCreate is a boutique organic and sustainable clothing label designed in New Zealand.  The garments are ethically produced in their sewing centre in Cambodia.  They provide life-changing training and employment opportunities for marginalised people and hope for a better future.

ReCreate’s sewing centre is located in the disadvantaged community of Dey Tmey, Cambodia.  The people there were originally slum dwellers who lived in the capital city of Phnom Penh.  In 2007, in efforts to improve tourism in Cambodia, many were evicted into rural sites called relocation areas – one of these areas was Dey Tmey, meaning “New Land”.

Far from their former jobs and schools, and desperate for employment, they quickly found themselves in desperate situations where the only sources of income were through prostitution, drugs, washing clothes, and selling food.

As the years passed and the community developed, opportunities for women to find employment remained scarce.  So in 2013, after several years of working alongside a local non-profit organisation, the founders of ReCreate became inspired to establish a unique opportunity for women.

Erica Gadsby together with photographer Deborah de Graaf, also a young mother, launched the ReCreate sewing centre.  The first intake of students began their journey of learning a new skill in order to transform their lives.

“We began with three students and a Cambodian sewing trainer, starting with the most basic skill of tracing and cutting out a pattern,” says Gadsby.  “It was quickly apparent that all three women lacked in confidence, having only had a primary or limited secondary school education and rudimentary employment experience.  In fact, for one student it was the first time she had held a pair of scissors.” 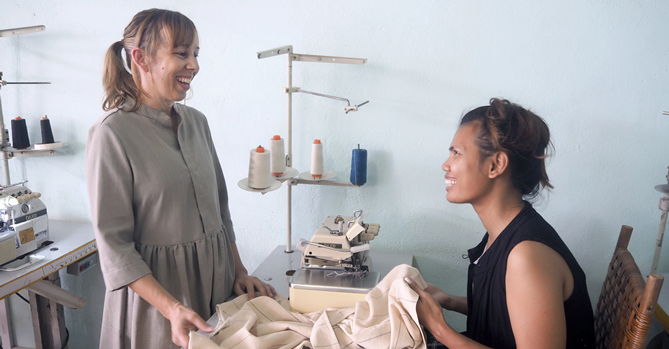 At this point the pair realised the extent of the journey they were undertaking together, but persevered.  Since then the ReCreate sewing centre has trained new students each year, while maintaining a core of fully-trained garment makers.  In addition, each student receives training in money management, Khmer reading and writing, English speaking and basic healthcare.

ReCreate is not just about meeting minimum ethical standards, they are committed to people and seeing their lives transformed.  Each year they train and employ new students who have a desire to learn a lifelong skill that will provide for themselves, their families and their futures.

In addition to full sewing training, students receive lessons in money management, reading and writing, and basic healthcare.  Alongside these students, their core team of skilled garment workers are fairly employed in an empowering work environment.  They are earning a living wage while continually being provided with opportunities to improve their skills and lives. 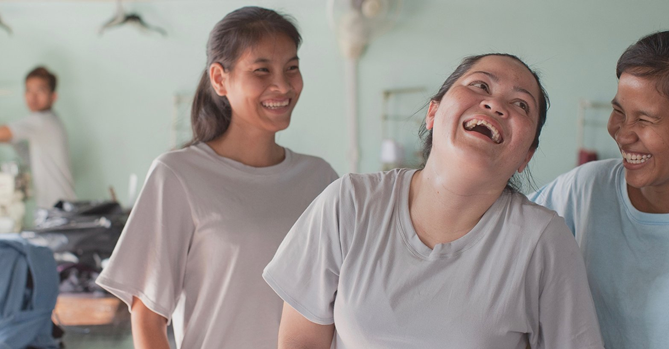 As ReCreate continues to grow, preparations are underway to open a second sewing centre in the rural province of Svay Rieng, Cambodia.  Not only is the clothing line ethical, versatile and highly wearable, all fabrics are sustainably sourced.  Their 100% cotton knits are certified by the Global Organic Textile Standard and organic denims are produced using 100% Better Cotton Initiative (BCI) fibres in a mill that recycles all water used in the water-intensive denim creation process.

Says de Graaf, “We are passionate about proving that transformation in the fashion industry is not only possible but essential moving forward.”