HOW IT ALL STARTED

It gave him an idea – to harvest, bottle and sell Manuka honey that’s deliciously good, looking after everybody (and every bee) at every step.

Jim and his team searched for the best areas of Manuka bush, building solid partnerships with the people who own the land. This took lots of time spent working together, before a drop of honey could be made. But this process meant that nowadays, wherever we place our hives, you can be sure that landowners are getting a fair deal too.

Just as important was looking after the honeybees. So our hive of industry grew to include clever beekeepers, and artisan honey makers to make sure every pot is delicious with the quality you’d expect from high MGO rated Manuka honey.

These days, as well as making our very own Manuka honey, we’re sharing it with honey lovers throughout the world, cutting out the middle man, so you get the real deal at a fair price. 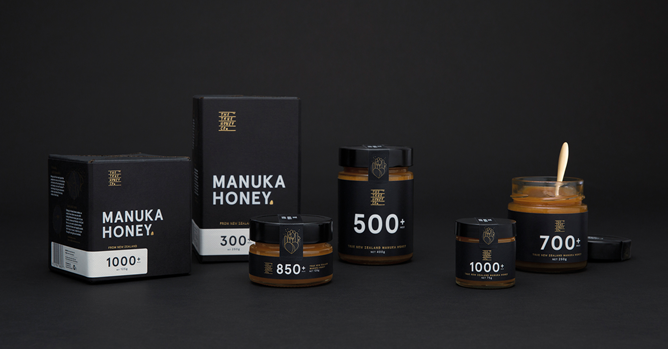 HONEY FROM SOMEWHERE FAR FROM ANYWHERE

A rare and precious honey from New Zealand – each region’s climate and landscape contributing to our honey’s rich, complex flavour characteristics.

WHY IT’S SO GOOD

All honeys are not created equal. Most honeys contain a naturally occurring hydrogen peroxide (HPA). But Manuka honey’s contains something else, hence the term ‘non-peroxide activity’ (NPA). That ‘something else’ is methylglyoxal (MGO), a sugar molecule found in most honeys in small quantities. But in Manuka honey, MGO can be up to 100x higher.You know you’re getting the good stuff with The True Honey Co. because we only sell rated honey from MGO 300+.

This raw natural bounty comes from deep within wild, remote bush country – tough, rugged, and a challenge just to get there. The taste is a little untamed too – rich, resinous, bittersweet – to complement your culinary explorations.

WHAT IT SAYS ON THE JAR

We’ve cut out the middle man and only sell our very own honey direct to you from this very website. So you can be sure that you’re getting a premium quality, Manuka honey, at a fair price.

A collection of exceptional quality Manuka Honeys for soothing sweetness, and your finest culinary adventures.

All direct to you from The True Honey Co. hives. We sell only Manuka honey rated 300+ MGO, and independently test and guarantee the MGO level in every batch.